11 Things To Do Instead Of Watching The Royal Wedding from Chris Carroll on Vimeo.

JUST A HEADS UP! Â This is a long post. Â Go get a water or something before continuing.

As some of you, who follow me on Twitter have seen, I posted an opinion about Microsoft last night:

Yes, it was a but much but here is what my past seven days has been like. Â I’ve been dying to try out Windows 7 since I’m still running on XP on my gaming machine and was looking forward to having a Windows box thats just as useful as my Mac. Â The only thing holding me back is my saved games through Steam. Â Even then I didn’t really care too much, I just wanted to finish playing Fallout: New Vegas before I formatted because I didn’t want to go through backing up a bunch of files.

Anyway I beat the game, yay for me, and I feel comfortable formatting everything and starting fresh.Â I didn’t backup my drive, nothing I couldn’t reinstall was on there and I had nothing important to save. Â I throw the disk in, do a complete format and install from disk and everything is working fine. Â The installation completes and it’s time to boot into Windows for the first time. Â It’s starts loading Windows and I get this: 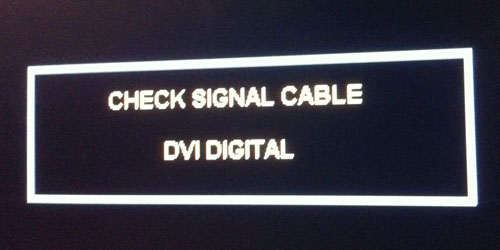 So I restart, I restart agan, and again. Â I start in Safe Mode…which didn’t work because I needed to go through my first boot normally to complete the installation. Â I was suck and very annoyed. Â I figure it’s something with my graphics card so I start Googling “Nvidia GeForce 9800 GT No Signal Windows 7” and I get a lot of angry forum posts back on other people complaining about the same thing. Â 3 hours later I’ve had it with reading through them all. Â People complaining about the same thing and none of them had answers all while Nvidia and Microsoft say the card is certified and compatible with Windows 7. Â So I’m stuck and I’m done for the night.

Bring my computer into work. Â I try reinstalling Windows in my down time, still no dice. Â @APIguy gives me a hand and opens up one of our Mac Pro’s in the office and hands me a Nvidia 9600 graphics card, which was the only one in the office that fist since I have PCIX slots. Â (Nerd Speak) Â Bam, windows loads fine, I can complete my setup and get my first look into Windows 7. Â I boot in safe mode and reinstall my drivers then shut down and swap the cards back out. Â Boot normally and again….no signal. Â WTF. Â I boot into safemode with my 9800 and it works. Â I try reinstalling the drivers. Â I download driver cleaner to wipe the old drivers out. Â Nothing…no signal. Â So I boot with both graphics cards. Â And the 9600 from the other mac works! Â And Windows 7 recognizes there are two cards in the box and gives me the option to plug in up to three monitors. Â WOOO! Â If it only f*cking worked! Â Later that night, another 4 hours going through forums and digging for info. Â I found one topic that helped. Â Apparently Windows overrides the installed drivers when it’s thinks theirs are better. Â It was a how-to on stopping windows from auto installing it’s own drivers when new devices are plugged in. Â oooOOHHHHhhh Windows you son of a bitch. Â I boot in safe mode, shut off that “feature” and boot Windows normally and voila, Windows 7 Boots on my graphics card. Â YAAAAAAYYY! Â I download some updates and install Steam and start bringing my games down. Â 1 hour later I try launching Left 4 Dead 2………Sorry, the program has crashed. What??…okay how about Team Fortress 2………crash. Â WTF?? Â I reinstall graphics drivers update the computer…..crash, crash, crash. Â I’m done with 7. Â I’m done for tonight. Â Time for bed.

Got My XP DVD. Â Boot from disk and I start installing: 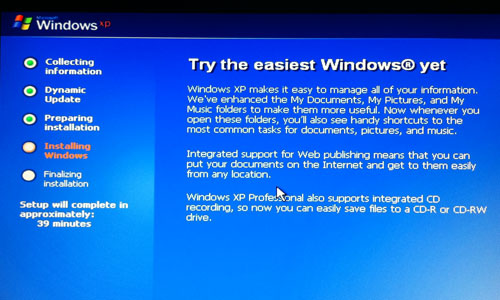 An hour later I get into Windows. Â Home sweet home. Â I start installing my network and system drivers. and of course spend another two hours installing updates: 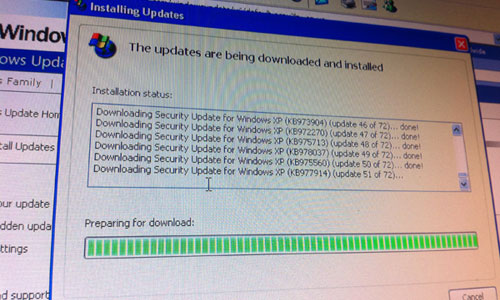 Everything is updated and it’s time to restart…..and then I get….no signal.

Okay. Â I start digging for old drivers. Â Clearly something is wrong with Nvidia playing nicely with windows. Â So I boot in safe mode, find the archived drivers on the Nvidia website and catch an old driver from 2009 and reinstall the old drivers. Â Holy Crap it works again. Â I finally download Steam again and an hour later have L4D2 installed. Â And to my amazement…. 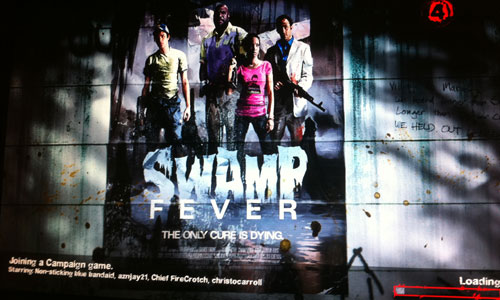 I got to play. Â I’m now back where I started and I have my gaming PC back. Â In the end it took me 11 hours over three days to find out Windows doesn’t play nice with my graphics cards Windows 7 Drivers. Â I’ll be doing more testing later on another partition but for now I’m sticking with XP. Â So, all versions of windows seem to be having problems with the 260.99 version Nvidia Drivers. Â I had installed the 197.45 version drivers and those seem to be working okay. Â Ladies and gentlemen, it’s time to game.

Don’t show it at all. This is on the idea of the quality vs. quantity rule. Everyone hits a point where they have to balance the two, whether you’re buying supplies for your office, or those $1 burritos you find in the frozen food section at Shaws. (No Brainer – A MUST BUY!) Like I said, this concept can really apply to anything. Especially video creation. Seth Goden had a similar post too.

You may have heard of a video I was working on late last year called Knock Knock. I filmed it, edited it, and released some B-roll from the takes. After chopping it all together I watched it a few times through and realized it just wasn’t funny or good at all. Then I had a decision to make, either I can release it to grow the library of flicks I’ve been in or trash it. I decided to scrap the project. I’d rather be able to say I was an extra in The Matrix, then say I was a lead in Tremors 5-7. Bacon was smart when he ditched on the second one.

Above is one of the scenes where I’m supposed to be driving around listening to some music when something embarrassing comes up on my iPod. I think they did this in Tommy Boy too…..no wait, I know they did this.

This text will be replaced

You need to upgrade your Flash Player

This past Monday we got another snow storm. Not a bad one, I was able to drive into work. So I filmed my drive into work. I decided to use the video to release two tracks I’ve writtin under the Craziators. I hope you enjoy the music and I hope the video is entertaining enough. It was hard to control my car at 682MPH so you damn well better find it entertaining!