So, I’ve been an Apple fanboy for the past six years. I loved my PowerBook when I bought it in 2005 and I love my MacBook Pro I got for free cause Apple comped me for not being able to repair it under the AppleCare warrantee two months before it expired. That was the point that really sold me on Apple. I grew up on Windows but the customer service, computer quality, and experience in store and in general with Apple has been top notch.

Today I’m still happy with their products but, as odd as it is to say this about a company, their future outlook doesn’t seem to match as well as it did with mine. Apple is pretty much turning into the company they swore they would never be like, and that company is Windows. With the poor handling of all the negative PR they’ve been getting it’s really changing my opinion. And the main reason is with my iPhone. I love it, I think it’s one of the best phones on the market but with stopping data phone and video calls through Skype or other programs over 3G and pretty much telling Adobe to fuck off I’m starting to feel like I’m being left behind in the technology world. (Anyone notice all the Safari/Flash crashes all of a sudden?) Plus all the crap going on with the app store and how biased it can be, I’m getting annoyed at how they’re treating developers since I soon hope to be one. After giving Apple $200 for the phone and giving AT&T $120 a month for service I get pissed when I can’t load a webpage that has flash or use my data plan as I want for the $30 a month I’m getting raped for it.

I can’t just blame Apple though. AT&T is the real reason for not allowing data calls or video over 3G and they’re also the reason YouTube looks fucking disgusting if you’re not on WIFI.

But with both companies equally pissing me off I’ve decided, against my better judgement, it’s time to jailbreak the phone and get what I paid for. It’s now your legal right to jailbreak your iPhone if you want to. Now I’ll be able to install a plugin to view flash, and make my data and video calls over 3G. Tethering to my laptop is now an option for me without paying another subscription to AT&T at $30 a month. I ALREADY PAY FOR UNLIMITED! These and a few others are the reasons I almost switched to Android and to a different network.

But of course my second wind is short lived as I find out the easy to do jailbreak is only supported up to the OS version 4.0.1 and I’ve already upgraded to 4.0.2â€¦â€¦.damn. No I can’t seem to downgrade from my Mac so I’m stuck waiting till they update the jailbreak software. If you haven’t upgraded your phone then I suggest you go for it. You can always revert back to factory settings so if something’s wrong with the phone you can revert and bring it back to Apple to deal with. Here are a few links to get you started:

iPhoneOverload.com – Image Credits and for a good Jailbreak Glossary 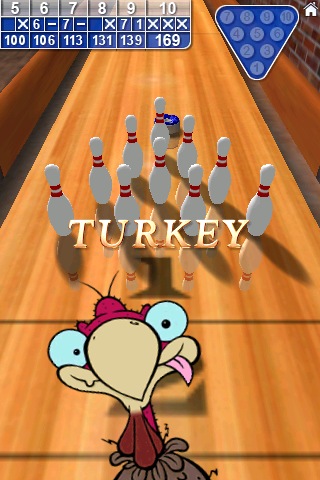 If you have an iPhone or iTouch and remotely like bowling then you need to download this game. 10 Pin Shuffle combines shuffle board and bowling into one and two awesome games. It’s one of those games that are so simple you just can’t stop playing it. It comes with two game modes; bowling and shuffle board. I never knew I liked shuffle board! And since I like it, you know it has to be awesome. The graphics are impressive for a bowling game and it’s multiplayer! And I mean real multiplayer, not the whole no network no game thing. You can chose to link via wifi and bluetooth. The game goes for $1.99 and like I’ve said its completely worth it. The only gotcha I can see is there may be some chop when playing multiplayer and you can only play with up to two people so don’t go thinking you can have a third join your game you damn hippy!

So this is about the 15th straight day of rain and I have a feeling this might just carry straight into Fall.Â  At this point I’m fine with that, although maybe I’ll move to Florida. 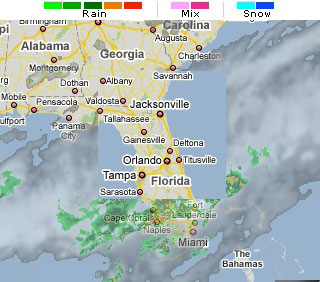 Apparently, according to my Weather.com iPhone app, it never rains in Northern Florida!Â  Orlando, Tampa, you know all the good cities that are worth visiting. Â Although I guess I can live with the rain.Â  It could be worse.Â  Just look at this image on a news report from CNN on lava rain in Hawaii… 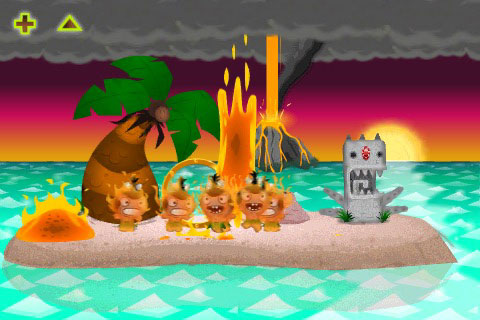 And by that I mean I was playing Pocket God on my iPhone.

I have a feeling I’m not the only person that can say they were a littleÂ disappointedÂ with the latest Apple keynote. Â Well I guess I can say I’m more than a little. Â I’m very surprised that they released the eight core Mac Pro and new X-Servers last week with them knowing this is all they had to offer this week.

Â Cute and compact I think this is a decent attempt to make a smaller more portable computer. Â But not for $1,700 – $3,098. Â If your going to spend that much you should get a real computer. Â For a 1.6GHZ Duo Core 2, an 80 GIG drive with 2 GIG’s of ram I feel like I’m getting robbed. Â This computer wouldÂ possiblyÂ considerableÂ if it were â‰¤ $1000. Â Anything more than that and your throwing your money away. Â For that price get a Macbook with a much faster processor, more storage and more ram. Â I feel like this item falls next to the Apple TV. Â A for effort, D for suck. Â Bring this back home and do it over.

Â I am a bit glad that they gave some attention to the Apple TV. Â Finally making an interface to give it access to the iTunes store. Â I’m not too impressed by their new movie rental service. Â $5 for a new movie rental, and $4 for older movies. Â Something like this isn’t going to take me away form Netflix, and if this was the case I would just go to Blockbuster and get the physical DVD. Â

As for Time Capsule, I feel like this can go either way $500 for a 1TB wireless N access point isn’t so bad. Â However something like this isn’t for me. Â I’d rather just get a cheap external drive to make my Time Machine backups. Â I rarely use wireless as it is. Â

And that was it, really just leaving meÂ disappointed. Â  I guess you can’t win them all.