If you have an iPhone or iTouch and remotely like bowling then you need to download this game. 10 Pin Shuffle combines shuffle board and bowling into one and two awesome games. It’s one of those games that are so simple you just can’t stop playing it. It comes with two game modes; bowling and shuffle board. I never knew I liked shuffle board! And since I like it, you know it has to be awesome. The graphics are impressive for a bowling game and it’s multiplayer! And I mean real multiplayer, not the whole no network no game thing. You can chose to link via wifi and bluetooth. The game goes for $1.99 and like I’ve said its completely worth it. The only gotcha I can see is there may be some chop when playing multiplayer and you can only play with up to two people so don’t go thinking you can have a third join your game you damn hippy!

Unable to load video player. This is likely because the player is outside a Flash-enabled browser or the necessary version of Flash is not installed.

Left 4 Dead is just one of those games that shows a little goes a long way.Â  The game itself isn’t long but you can honestly play this over and over for months and still have a blast.Â  Survival mode was released not to long ago and it’s really added a quick fast pace to a game that would take about an hour to play.Â  For those of you who don’t know what left for dead is please let me to google that for you.Â  You may also want to click here.Â  Now you may ask yourself, what’s better than beating a game?Â  Why not having a life and finding all it’s exploits….well I mean I have a life, so this was shown to me.Â  shutup.Â  I’ve included a video of a map exploit on the Rooftop Finale from the No Mercy campaign.Â  Much like The Crane in Dead Air there is a ledge you can step to that technically puts you out of the map which the zombies can’t find.Â  You can stand or crouch but for some reason when you jump they can lock onto you.Â  I start getting board so I start jumping….which inevitably leads to my death. 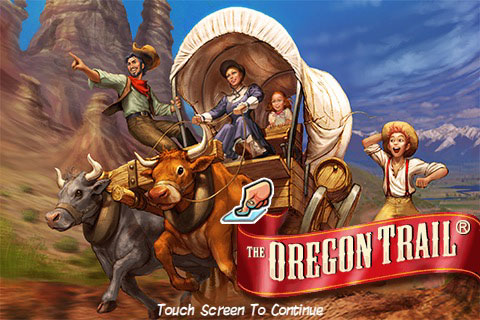 OMG! FTW! ICBINB! Yes, The Oregon Trail has been released for the iPhone. Everyone remembers The Oregon Trail. Remember when you had your computer class and instead of learning, because the only thing your teacher could do was put paper in a printer, was playing The Oregon Trail. Yes those old Apple machines that looked like they could still take a spreadsheet to load an app. Oh those days were awesome. A later version was released for Windows 95/98 or something that was a lot better as well. The one for the iPhone looks pretty good too. It’s sporting 4.5 out of five stars in the App Store and I feel it’s deserved. For .99 you can own your own copy. You start the game and are given three skill options. You can either be a banker, farmer or carpenter. Like in the old games the banker had more money, the farmer can carry more food and care for oxen, and the carpenter takes better care of the wagon condition. 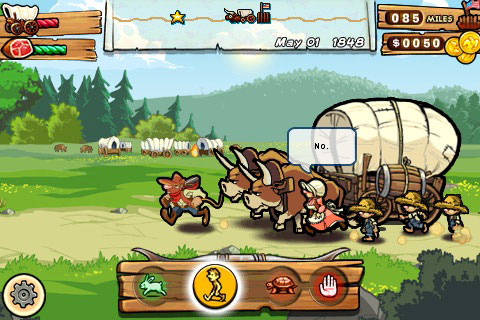 I think the wagon condition is something new. In the old games you would break wheels and wagon tongues, but in this version there is a wagon health meeter to keep an eye on. You can also choose between a regular, Prairie, or Conestoga wagon. The Prairie hold more food, the Conestoga holds more hardware and is better in the water. You can also customize your party names. You start your travel keeping an eye on your status. 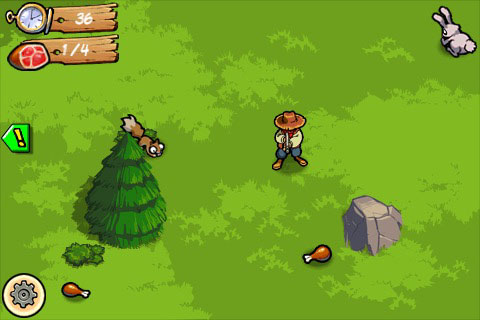 in this game you can fish, hunt, pick berries, and do other side jobs while on your path however you can only do it when the opportunity arises by other characters on the trail. You can’t hunt randomly however when your food gets low you seem to always stumble into someone to hunt with. The game does have some side games that take advantage of the accelerometer like crossing rivers and sifting for gold. A new addition I liked int the game was to choose directions when the road forks giving you different games when you replay. I feel the game is worth 4 stars and should be priced the same. (That means $4.) I was able to beat it about 2.5 hours on easy. Give it a try and let me know what you think.

You should make the game even better by naming you friends.Â  You can name them right after you select your profession. 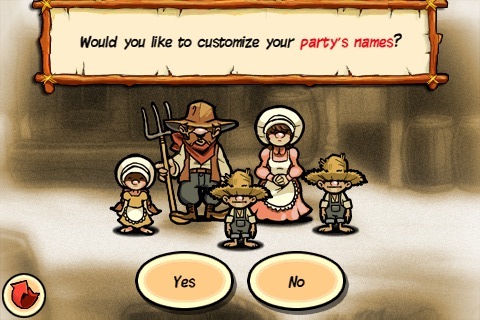